The Most Anticipated Building Projects of 2018

Scanning the globe for signature architectural feats that will be completed in 2018, CNN reported that the new year promises just as much “eye-catching” architecture as last year.  Some of the most anticipated projects include a multi-colored Lego House in Denmark, a South African art museum inside a former grain silo, a glass courthouse in Paris, a pencil-thin skyscraper in New York, Beijing’s China Zun Tower and the soaring Lakhta Center in St. Petersburg. Some of the biggest names in architectural design are also involved, including Thomas Heatherwick and Kengo Kuma.

While the Lakhta Center is on course to become Europe’s tallest new building, Asia is again expected to drive global skyscraper construction with buildings such as Beijing’s 1,732-foot China Zun Tower that will be the year’s tallest building if it finishes on schedule.

In 2017, China built more than half of all the skyscrapers measuring 200 meters (656 feet) or taller, a trend that looks likely to continue this year, according to the Council of Tall Buildings and Urban Habitat (CTBUH). Notable among the country’s planned high-rises is the late Zaha Hadid’s Leeza SOHO, a twisting glass tower — also in Beijing — that Hadid’s firm claims has the world’s tallest atrium.

While glass and steel are still the predominant materials of choice for high-rise construction, timber construction has gained a foothold according to the CTBUH’s Skyscraper Center database. Framework is an 85-foot-tall, wood-framed residential structure in Portland, Oregon; this timber tower designed by Lever Architecture, will be the tallest “wooden” high-rise in the U.S. when it is completed this year. 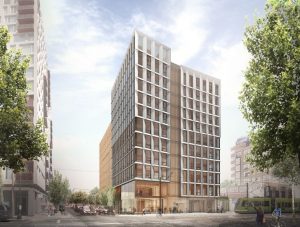 In architecture, height isn’t everything — and many of this year’s most remarkable projects are far from record-breaking in scale, but will still have a transformative effect on their respective cities’ skylines. The long-awaited Grand Egyptian Museum in Giza is scheduled to partially open in May, more than 15 years after the competition for its design was announced. In Scotland, the city of Dundee is preparing to unveil architect Kengo Kuma’s first U.K. building, a stone-paneled, secondary outpost of London’s V&A museum.

Elsewhere in the world, Istanbul will unveil its new airport, Helsinki will welcome a new public library with an undulating wooden façade, and in New York, Thomas Heatherwick’s Vessel, a 150-foot-tall sculptural mass of interlocking staircases, will decorate the Manhattan landscape.

Some trends such as the continued drive for low-energy buildings and a growing focus on renovation and preservation will continue in 2018. For more, see this CNN page: