The Resurgence of Postmodern Architecture

According to the pundits, Postmodern architecture is experiencing a “revival,” and despite its critics, the design theme is far from long-gone. In fact, it is a style being adopted by many contemporary architects and designers.

Postmodern architecture emerged in the late 1960s as a reaction to the Modernism style, which gained popularity in the early decades of the 20th century. Modernism in architecture was intended to better reflect the experience and values of modern industrial life; it morphed into and included the Mid-Century Modern architectural trend that evolved between the years of 1945-1965.

At a certain point in the 1960’s, Modernism seemed to lose its luster and Postmodernism evolved as an escape from what some considered the monotony of Modernism. It offered an alternative to Modernism’s more entrenched ideals and rigidity of design conventions. Postmodern architecture was, and is, more expressive, more flexible, more integrative; it took the minimalism of Mid-Century Modern and dressed it up with color and patterns; it embraced many architectural styles, cultures and whimsical features.

In a recent CNN piece, Owen Hopkins, a senior curator at Sir John Sloane’s Museum and author of Architecture and Freedom: Searching for Agency in a Changing World, posited that, “While Modernism had sought to draw a line under the past, Postmodernism used the past as a quarry of sources, references and quotations, deploying them with wit, irony and irreverence. After decades of being mute, architecture was allowed to speak again through color, ornament, decoration.”  Hopkins firmly believes that Postmodernism is back (assuming it ever really went away) and that it continues to inspire the architects of today.

Designer Adam Nathanial Furman agreed with this position in a recent interview with Dezeen. A founder of the Postmodern Society, Furman is an expert on late-20th-century style and just authored a book with Terry Farrell – the architect responsible for several postmodernist icons built in the 1980s. Their book, Revisiting Postmodernism, showcases some recent examples of the postmodern resurgence such as MVRDV’s market hall in Rotterdamn (2014). 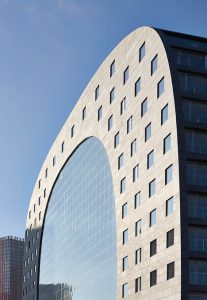 While we ponder why postmodern architecture is making a comeback (could it be the chaotic, complex, global nature of the design world today?), the following is a look at some classic examples of Postmodern design, both past and present.

Architect Terry Farrell’s SIS building in London (1994), which is also known as the MI6 building, may be the pinnacle of British postmodernism.  Its Mayan and Aztec temple design creates a layered fortress and incorporates 60 open-air terraces into its design – as well as triple-glazed windows and buttressed protection against bombs.

Modernism meets ancient Mediterranean architecture at the Clos Pegase Winery in Napa Valley, California, designed by Michael Graves. Another of his creations, the Hyatt Regency Fukuoka in Japan, embraces a vast pyramid structure, is naturally lit from above, and encircled by a rotunda of hotel rooms. 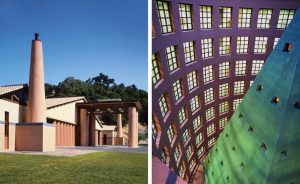 Clos Pegase Winery in Napa, California and the Hyatt Regency Fukuoka in Japan

The Kreeger Art Musuem in Washington DC (1963) by Philip Johnson with Richard Foster  was previously a residence. It is located in a wooded park of over five acres, with layered arches inspired by a Roman aqueduct design. 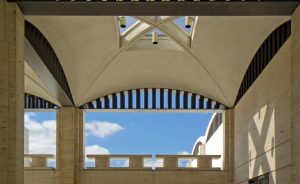 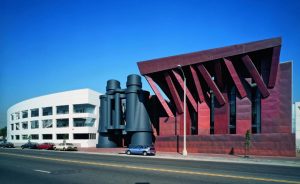