Baha Mar: A Sto Showcase In The Bahamas

The Baha Mar Resort & Casino on the island of New Providence in the Bahamas opened last year with great fanfare and has been a showcase for Sto products used in its construction. Located on Cable Beach, outside the city of Nassau, the new resort was heralded as the largest hospitality project ever built in the Caribbean.

The property covers over 1,000 acres including half a mile of prime beach frontage. The sprawling tropical megacomplex which cost a reported $3.4 billion to build, includes three world-renowned luxury hotel brands: Grand Hyatt, SLS and Rosewood (2,300 rooms in all). It also boasts a conference center and casino (150 tables and 1,500 machines), a spa, racquet club and 18-hole signature golf course designed by Jack Nicklaus. There will ultimately be a total of 11 pools, 42 restaurants and bars, and 60,000 square feet of retail with luxury purveyors such as Tiffany’s, Bulgari and Rolex. Oh, and let us not forget the 250 palm trees. 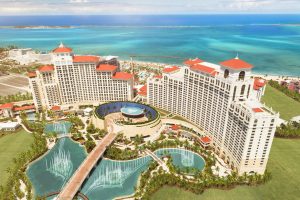 The world-class destination resort is an imposing and impressive landmark on this small Caribbean island. It encompasses three million square feet of construction, 6,000 tons of structural steel, 500,000 sq. ft. of glass, and an abundance of StoTherm exterior insulation (more than 16,000 bags of basecoat alone) and Sto finish products including Stolit® Milano. 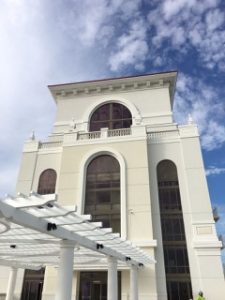 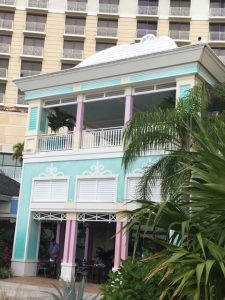 The project initially called for stucco exteriors, but when Baha Mar consultants visited the nearby Atlantis resort on Paradise Island and saw the aesthetic caliber and versatility of the exterior insulation finish system (EIFS) used there, as well as the weather- and moisture-resistant properties of EIFS, the specs for Baha Mar were recalibrated. The competition between building material suppliers vying for the job was fierce, but in the end Sto prevailed. 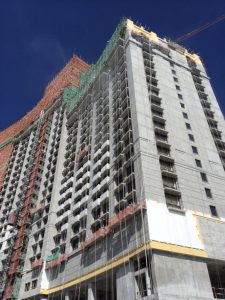 The general contractor CSCEC (China State Construction and Engineering Company) and the project owners were impressed with the personal involvement of Sto’s management team and the company’s tailored solutions. According to Jorge Angel, the Bahamian contractor and applicator who worked on the project for over 5 years, “Sto was chosen due to the quality, versatility and range of their EIFS product line, but also due to their strong presence and reputation worldwide, as well as the caliber of their personalized, hands-on customer service.”

“Having Sto as our allies on this project was the key to our success. They were a tremendous resource” said Angel. His company, KHS&S-iLand (a joint venture between KHS&S contractors in Tampa, Florida and iLand Applicators in the Bahamas), had a huge challenge taking on such a large project on a small Caribbean island. They were working with Chinese, Colombian and American management crews talking in three different languages and all working for the largest construction company in the world (the Beijing-based CSCEC). 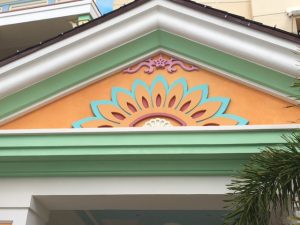 “Choosing Sto was the best decision we made,” recalls Angel; “the company’s experience and large presence in the Caribbean and Latin American markets was the right combination we needed. Every time we had an issue, the Sto team proved quick to adjust, responding at the highest level from beginning to end.” Angel also noted that in addition to the exemplary Sto service provided, the Sto exterior continuous insulation system and finishes have withstood the test of time and adverse weather including the harsh tropical heat and two horrific hurricanes (Matthew and Irma).

The StoTherm® ci and StoGuard® waterproof air barrier system have done what they were designed to do — provide protection against moisture intrusion and promote improved energy efficiency. Baha Mar has withstood 100 mph winds; its cladding, decorative architectural features, and multi-colored finishes have fared well in the tropical climes.

The StoTherm systems and finishes have proven to offer so many advantages and benefits – resiliency, efficiency and beauty –that they will be used again in the restoration of the adjacent 700-room Melia hotel – a companion property to the Baha Mar that will tower above a tourist-pleasing eco-water park.