Hurricane Restoration and Planning for the Next One

Hurricane force winds are relentless and, as we’ve learned, they do not differentiate or discriminate. Any structure in the storm’s path may be at risk, and while no building is entirely safe, some are more resistant to damage than others due to resilient design and construction.

So, in the aftermath of a devastating storm, it behooves property owners to carefully assess damaged structures and consider restoration and repairs that will mitigate future storm damage. Whether the plan is to repair, restore or rebuild a storm-ravaged building, there are many solutions today that can help withstand high winds and water damage in the future. In many cases, a relatively small up-front investment can result in big future savings based on losses avoided. 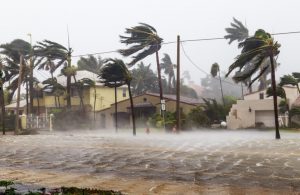 The weather’s not getting better, but builders are getting smarter

New high-performance materials and components and improved construction methods offer much greater resistance to the forces of nature that cause damage. Builders who adopt the best technology for resilient construction and restoration — before and after a hurricane — can help ensure that commercial structures better withstand nature’s fury

When windows burst from high winds, buildings can pressurize as wind rushes in, popping off the roof. New roof attachment methods can add strength, and spray-foam adhesives (which are applied on the inside of the house’s roof and double as insulation) are rated for higher wind speeds. To deal with flooding, hydrostatic vents can allow water into the home but stop floodwaters from accumulating, potentially degrading its walls and foundation.

Most of these systems can be installed economically on a variety of construction types, including metal frame with gypsum sheathing, wood or steel frame with plywood sheathing, or concrete masonry. Improved watertight and water-shedding exterior insulation systems that resist rain penetration in storms are also available and come in a variety of decorative and protective wall finishes, offering aesthetics as well as protection against some of the most severe weather conditions in North America.

South Florida is the heart of hurricane country and the area where many wind-resistant structural solutions have been introduced, developed, and proven in the field. After Hurricane Andrew in 1992, Florida codes were the first in the nation to toughen up. And in the heavy hurricane years of 2004 and 2005, Florida’s tougher building practices paid off: newer structures in the state suffered less damage from storm winds than older buildings did. In the Miami-Dade County, Florida area, NOA has established stringent construction criteria for impact resistance, air and water infiltration, and wind load resistance

Building codes are the baseline defense against hurricane damage. Improved building codes in Florida (the most stringent in the nation) after Hurricane Andrew required installing impact windows, using stronger ties between roofs and walls, and securing roof shingles with nails instead of staples. And indeed, newer buildings built to code fared better during Hurricane Irma.

Strong, enforceable building codes play a huge role in prompting architects, engineers and contractors to embrace the concept of resilient design. Texas state officials, with the support of the local building community and regulatory agencies, announced a $61 billion plan to rebuild after Hurricane Harvey devastated the southeast area of the state with wind, rain and floodwaters, and resilient measures are part of the plan.

A National Institute of Building Sciences (NIBS) study recently determined that for every federal grant dollar spent on disaster resiliency and mitigation, the U.S. can save an average of six dollars. These are impressive numbers to keep in mind.

Another plus: NIBS also projected that implementing resiliency measures and building to stricter codes could create 87,000 new long-term jobs and increase the use of American-made construction materials by 1%.