The shortlist for the prestigious Architectural Photography Awards has been published and, as always, it includes an eclectic collection of breathtaking images. 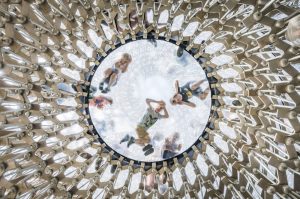 Hundreds of photographers from 47 countries entered in the competition which included four main categories — exterior, interior, buildings in use, and “sense of place” – all intended to showcase the artistry of architectural photography. The 20 photographs chosen as finalists will be exhibited at the World Architecture Festival in Amsterdam from November 28-30, where the winners will also be announced. 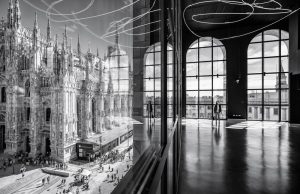 Italian photographer Marco Tagliarino entered an image of the historic Piazza Duomo designed by Italo Rota into the Sense of Place category.

The 20 stunning photographs chosen as finalists include a seashore chapel in Qinhuangdao, northeast China, as well as an abandoned power station in Budapest, the timber-clad lobby of Bloomberg’s European headquarters, and a provocative shot of swimmers wading into waters where the Yangtze and Jialing rivers meet in Chongqing, China with the site of a modern new building complex by Safdie Architects looming in the background. Two of the final photos were inspired by the same architectural wonder — The Hive in London — and both images could not be more disparate.

An expert panel of judges will select winners in the four categories as well as in two additional areas: Portfolio and Mobile. The new Portfolio category asked for 46 photographs of one architectural project and the Mobile category (as you no doubt surmised) called for photographs taken on mobile devices.

Since its inception in 2012, the Architectural Photography Award program has grown in global stature. Thanks for this go to the World Architecture Festival and to Sto – a façade and interior system manufacturer; Sto has been an ardent supporter and sponsor of the competition from the very beginning.