Strange building design abounds. Some of these buildings are functional, some are artistic, and astounding. While there’s no shortage of unique buildings that could be on this list, here are six of our favourites that were just too amazing to ignore.

Located in Sopot, Poland, Krzywk Domek (Polish for crooked little house) is designed by Szotyńscy & Zaleski. Built in 2004, the building is inspired by the Polish fairytale illustrations of Jan Marcin Szancer and Per Dahlberg. The 43,000-square-foot building is part of a shopping center. Defined by warped walls and roofing, the building also features glass designed to mimic the reflection of a funhouse mirror. 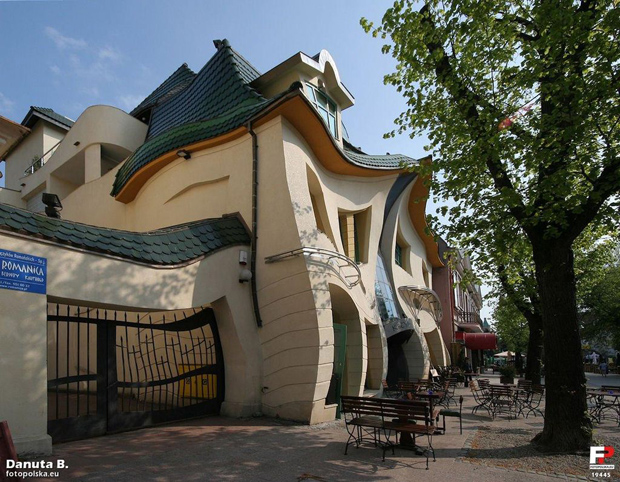 Photo by Danuta B. / fotopolska.eu

A giant bookshelf beautifies the façade of the parking garage of the Kansas City Library. Collectively named the Community Bookshelf, each of the 22 book titles is 25 feet high and nine feet wide. Members of the community voted on the displayed titles, representing an array of well-known literary works. 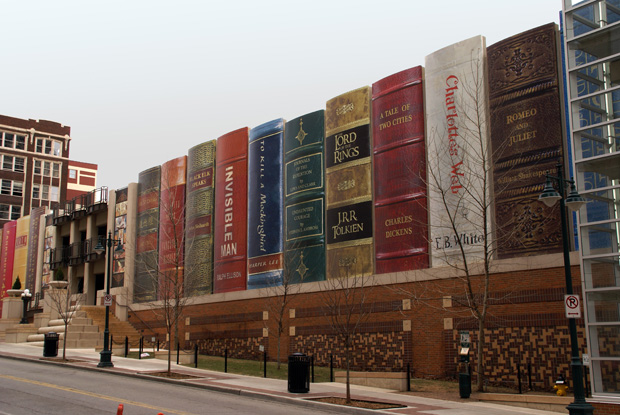 Library Parking Garage by Jonathan Moreau is licensed under CC BY 4.0

Coined the “friendly alien” by architect Colin Fournier, who designed the building along with Sir Peter Cook, Kunsthous Graz was built as part of the European Capital of Culture celebrations in 2003. Functioning as an art museum, the building is an example of blobitecture, or blob architecture, where buildings have an amoeba-shaped form. Per Designing Buildings, “The [building’s] skin generates energy through the use of integrated photovoltaic panels as a result of which, its environmental impact is very low. The skin also forms a ‘BIX Façade’ screen, capable of displaying interactive media using the 900 computer-controlled fluorescent lamps fitted beneath the surface.” 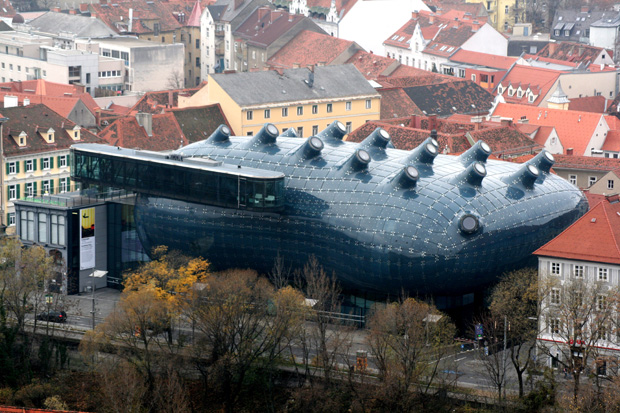 Kunsthaus in Graz by Marion Schneider & Christoph Aistleitner is licensed under CC BY-SA 2.5

Located in Nwark, Ohio, and currently for sale, the Longaberger Company’s basket-shaped building was designed by NBBJ and Korda Nemeth Engineering. The now-defunct parent company’s building is designed to replicate handcrafted maple wood baskets that the company once produced. The building is 180,000 square feet, seven stories and has an atrium topped with a glass ceiling. 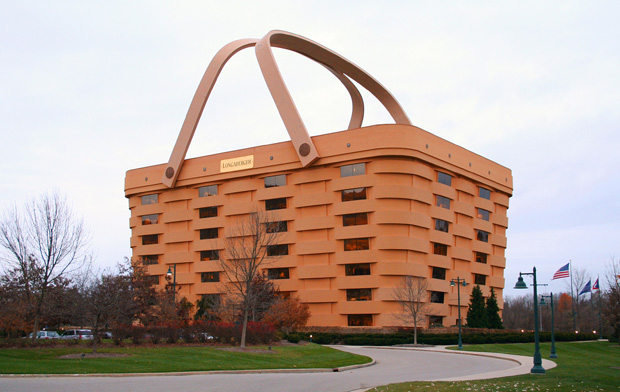 This popular tourist attraction in Belgium was constructed for the 1958 Brussels Word’s Fair and functions as a museum. Per Wikipedia, “Designed by the engineer André Waterkeyn and architects André and Jean Polak, it stands 102 m (335 ft) tall. Its nine 18 m (60 ft) diameter stainless steel clad spheres are connected, so that the whole forms the shape of a unit cell of an iron crystal magnified 165 billion times. Tubes of 3 m (10 ft) diameter connect the spheres along the 12 edges of the cube and all eight vertices to the centre. They enclose stairs, escalators and a lift (in the central, vertical tube) to allow access to the five habitable spheres, which contain exhibit halls and other public spaces. The top sphere includes a restaurant which has a panoramic view of Brussels.”

Also known as “Crazy House,” the house was built as a personal project by Vietnamese architect Dan Viet Nga. Nga designed the structure of the house to be based on the structure of a banyan tree, and also modeled the design after rolling hills and natural beauty of the region. Each of the five levels of the house has a different theme, and the architect used hand drawings instead of blueprints and non-skilled professionals to build the structure. Verging on bankruptcy while building the project with private funds, Nga eventually sold tickets to the property as a tourist attraction. It now functions as a hotel. 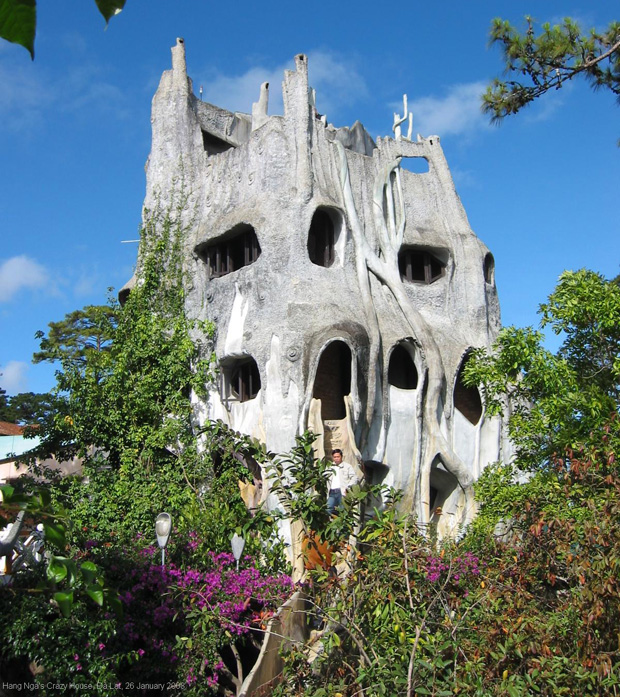 The exterior of Hằng Nga guesthouse by Kelisi is licensed under CC BY-SA 3.0

Admittedly, this list could go on for hundreds of more selections, but the above were some of our favourites. Honourable mentions to go to Nautilus House in Mexico City; The Piano Building in Huainan, China; House Attack in Vienna, Austria; and Palais Bulles in Cannes, France. Do you have any of your own favorites that you would include in your own top strange buildings list? Drop us a comment on Twitter, Facebook, LinkedIn, Instagram or Pinterest to let us know what you think.