Humans have a need to connect with nature. According to the Environmental Protection Agency, the average American spends 93% of their life indoors. This can’t be helping our rising levels of hypertension and anxiety, oft-cited research showing links between living in a greener environment and lower blood pressure. 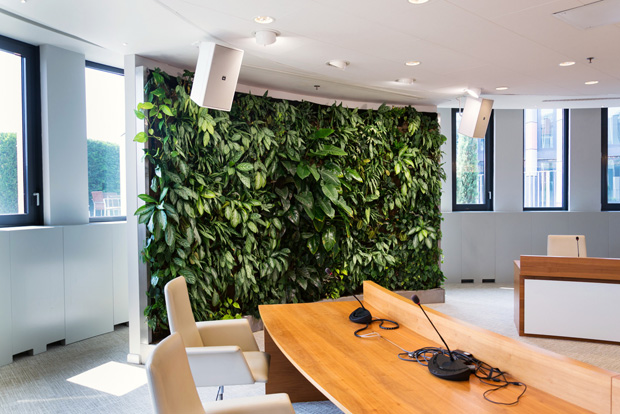 Enter biophilic design: The incorporating of natural elements such as plant life, lighting, natural air flow and views of nature into the built environment. Architects, designers, and building operators are finding that our increasingly urban environments are benefiting from the results of this concept.

While adding some potted plants around the office sounds almost too easy, productivity increases when those green elements are evident. According to Fast Company:

In a series of two studies, researchers in Norway found that subjects who did reading and attention-based tasks surrounded by greenery improved their scores more over time than subjects who didn’t. How does this work? One idea is called “attention restoration theory”: We spend a lot of time at work in intense focus, which leads to mental fatigue. Spending even a few seconds ripping your eyes from your screen to stare at a desk plant could help give your mind a break and restore your ability to focus.

Of course, biophilic design elements can go much further than that when incorporated into a building’s design. Function and aesthetics can benefit greatly. Living walls for example are not only visually appealing but can also reduce energy costs, improve air quality, add noise reduction and also assist in qualifying for LEED and WELL credits, among other benefits.

Many of the large tech companies, like Microsoft and Google, are upping their biophilic design game to some awe-inspiring levels. Per NBC News:

In its workspaces in Austin, Texas, Pittsburgh, and elsewhere, Google has measured the amount of natural light its employees receive and tested biophilic elements ranging from plants, terraces, and water features to organic patterns in carpeting. In Google’s Chicago office, employees can access sunshine-simulating full-spectrum light by adjusting the color temperature of task lights. Studies link sunlight to elevated mood and reduced stress, among other benefits.

Another example is in Amazon’s Seattle headquarters, which feature three glass orbs named The Spheres are filled with filled with a forested area that’s open as a workspace for its employees. The Spheres are filled with over 40,000 individual plants from over 300 species from over 50 countries. Other features within The Spheres include “treehouse meeting rooms, river and waterfall features, palladiums, a four-story living wall, and epiphytic trees,” the company says. To see 360-degree views of the space, check out their blog here.