More offsite construction and increased use of modular components are two trends anticipated in 2018.

After a robust 2017, commercial construction companies are anticipating an even stronger 2018. Trends for this year, include a continuing rise in offsite construction as well as increasing reliance on technology. Another emerging phenomenon is the increased focus on resilient design following the most destructive hurricane season on record and devastating fires and mudslides in California.

Other trends that will likely shape construction this year revolve around federal and state policies, the ongoing labor shortage and anticipated mega projects such as Amazon’s much-ballyhooed HQ2. Construction Dive identified what the editors see as the top eight trends for the coming year, and here they are:

The focus on strengthening structures is driven by the disastrous weather events of the past year. Hurricanes, heat waves, cold waves, flooding, tornadoes and wildfires took their toll, with a nationwide financial hit estimated at $400 billion.

Rather than constructing duplicate replacement structures, more property owners will likely demand resilient site and structure features, heeding the advice and support of organizations such as the U.S. Green Building Council. New projects are likely to mimic resilient construction that is already underway, such as re-evaluating building codes and redefining flood zones in Florida and Texas and fire-resistant construction in California.

The construction industry will continue to grapple with a tight supply of skilled craft workers as younger individuals shun construction as a career option, baby boomers retire and the federal government reverses the tide of immigrant labor from Mexico, Central America and the Carribbean. With industry groups continuing to lobby lawmakers for funding for trade education programs to help create a construction industry labor pipeline, these efforts could pay off and help ease the problem.

Meanwhile, the industry is turning to alternative construction methods to compensate for the shortage of skilled labor. Offsite construction and prefabrication, for example, are helping mitigate some labor issues, often reducing labor demands by as much as 50%.  Increased use of modular construction in 2018, could also reduce the need for additional workers.

As offsite components increase project speed, they are leading to greater collaboration between general contractors and offsite fabricators. With large companies like Turner Construction and Gilbane adding project manager roles for offsite, this delivery method is projected to gain momentum.

Cities are making big investments in transportation, integrating it into other public infrastructure upgrades. Nashville, TN, for example, proposes to spend $5.2 billion on an infrastructure and transit plan. Minneapolis’s $1.9 billion Southwest light-rail and Boston’s $2.2 billion overhaul of the area’s Green Line light rail are two other notable investments in transportation systems. In addition to traditional rail and bus systems and tunnels, high-speed maglev trains and hyperloop systems are also trending.

According to Construction Dive, construction technology was the “Trend of the Year” in 2017. It’s not going away; in fact it looks to be ramping with factory-based construction automation and standardizing design and construction, creating a continuum of services.

New policies at the federal and state level will continue to shape the industry. New York City now requires construction workers to undergo at least 40 hours of safety training. Los Angeles instituted a new seismic retrofit ordinance that will impact an estimated 1,200 older concrete buildings. As always, policies and politics will impact the construction business.

Microsoft is slated to begin a multi-billion-dollar redevelopment of its existing Redmond, WA, campus later this year; Marriott and General Electric are also expected to break ground on new headquarters developments.

As more firms continue to expand their facilities, many are also likely to add infrastructure needed to support their operations. Data center construction is an especially fast-growing sector, as companies amass unprecedented amounts of information. By the first half of 2017, data center investments had already doubled those made in 2016, coming in at $18.2 billion.

With mixed-reality headsets, such as Microsoft’s HoloLens, and wearable devices, such as Triax’s  Internet of Things-enabled sensors, high-tech wearables and both augmented and virtual reality will continue to make inroads, transforming job sites. Two of the greatest benefits these technologies offer are safety and efficiency — areas where the construction industry has struggled in the past.

Beyond the innovations and investment in con-tech, it’s also possible that technology will help attract younger workers who are captivated by the technology in-roads impacting construction, such as the increasing use of drones on survey sites. One thing is certain: the industry buzz can’t hurt.

Real Estate Trends to Watch for in 2017

PricewaterhouseCoopers and Urban Land Institute just released their annual Emerging Trends in Real Estate report for 2017. The report, based on interviews and surveys with industry experts, focused on three game-changers:

2) Labor shortages are inflating construction costs. The problem isn’t going away,  but vocational training and apprenticeships, as well as potential immigration reform may help ease the problem.

3) New technologies are having favorable effects, including innovations that make buildings smarter and more efficient, and augmented reality (AR) technologies that improve collaboration between builders, architects and developers during the construction process.

For a copy of the full Emerging Trends report

Architectural Tourism could take you to Nanjing, China, where you can savor large scale architecture forms with tranquil and contemplative gardens.

The following is a mere snapshot of the architectural tourism opportunities worldwide. 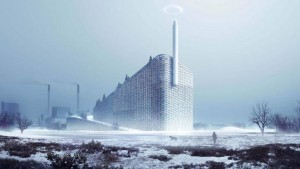 The Amager Resource Centre has been converting waste to energy since the 1970s, and next year will give residents a place to burn their energy – on its roof, which is being converted into a ski slope and green space for mountaineering and walking. The project is the brainchild of Bjarke Ingels Group (BIG) (stateofgreen.com) who also brought the world LEGO House  (legohouse.com)….another stop on the architectural appreciation tour. 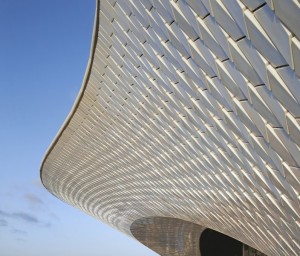 A view of the riverside facade of MAAT. Photo: HUFTON + CROW

In Nanjing, China the Nanjing Zendai Himalayas Center is a metropolis-scale urban development that will be complete in 2017, but there is already a lot to see.  An ongoing project for the Chinese architecture firm MAD, it will have a central valley, a lake, an elevated plaza, and other features that cultivate the traditional Chinese ethos of feng shui — a spiritual harmony between nature and humanity. It will span 6.5 million square feet. 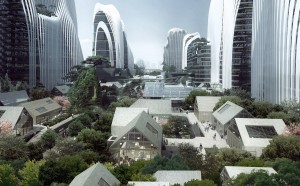 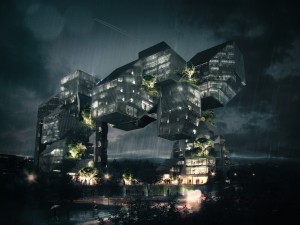 In San Jose, Costa Rica, the Costa Rica Congress Hall designed by Caza – a Brooklyn-based firm — connected a series of hypercubes to create a modular government building, which features a platform for public demonstrations. 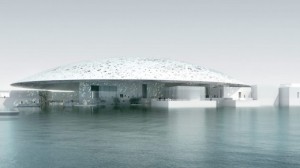 In Abu Dhabi, the Louvre Abu Dhabi will open in 2017. Brought to you by the architecture firm Ateliers Jean Nouvel, the museum will be one of five on Saadiyat Island designed by other giants of architecture — Hadid,Ando, Gehry and Foster. 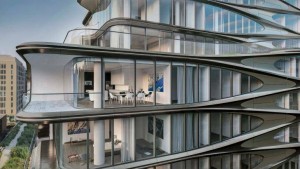 And this is just the new, latest, greatest architecture. If you want a memorable tour of American iconic architecture consider Chicago, long a laboratory of innovation and a showcase for great architecture. October 15-16 in Chicago you can tour “200 cool places in 48 hours” – over 200 buildings, hidden gems and architectural treasures will be open to the public for a behind the scenes tour; the free event is hosted by the Chicago Architectural Foundation. And while you’re in Chicago, if you haven’t done the architectural river tour, it’s a must.

Another rich landscape for architectural tourism is Los Angeles — from the Hollywood Bowl to the Walt Disney Concert Hall. Los Angeles’s skyline might not be as famous as Chicago’s or New York’s, but there are some seriously iconic buildings.

Heidelberg Village in Germany will be the largest residential Passive Design project in the world.

Touted as “the world’s largest passive housing” project, a 162 unit residential complex is currently under construction in Heidelberg, Germany. The solar-powered Heidelberg Village designed by the Frey Architekten firm will feature a wide range of sustainable features, as well as rooftop and vertical gardens. The complex is expected to use 75% less energy than a similar project using conventional building design.

The Passive design concept originated in Germany in the 1990’s, and has now been embraced worldwide as an effective and economic way to cut carbon emissions and reduce energy demand in buildings while still providing high-caliber living comfort, superior indoor air quality and structural resilience. While the movement began with a residential focus, passive “house” building principles have been adopted in major commercial building projects as well, setting new standards for heating and cooling efficiency, total energy consumption and air leakage. 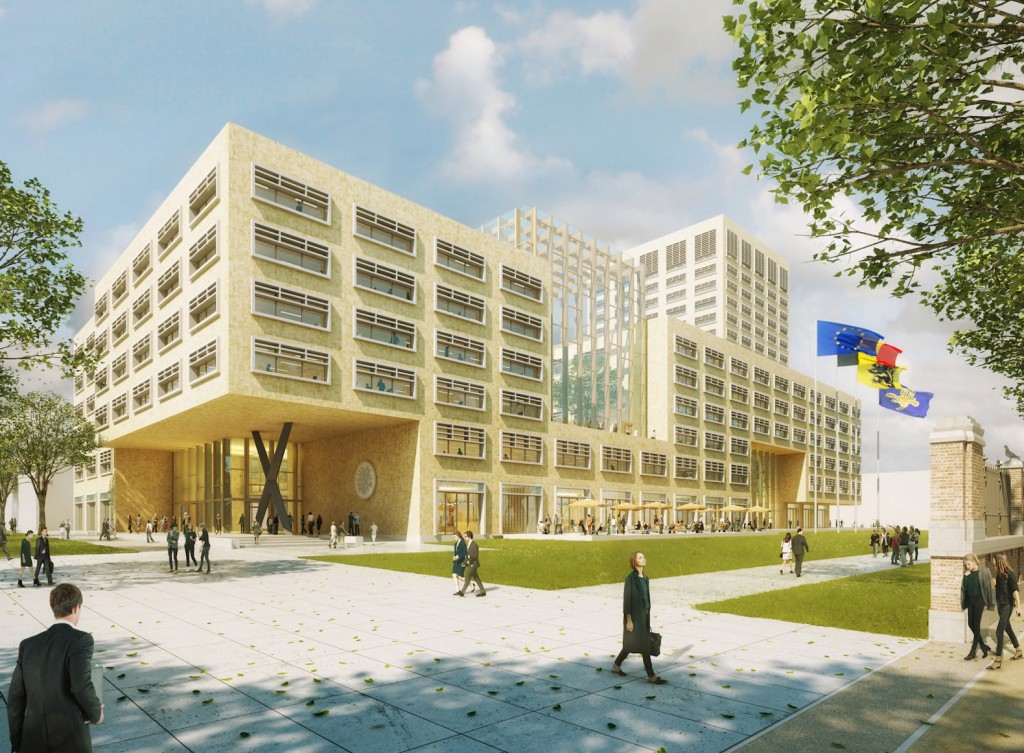 One of the most ambitious “passive design” commercial projects currently underway is in Belgium where Europe’s largest passive office complex is under construction. The Herman Teirlinch government office will be a 66,500 square meter mixed use, low-rise, sustainable building designed by Neutelings Riedijk.

While entire passive home neighborhoods have yet to be created in the United States, passive design residential and commercial buildings are cropping up nationwide. The key components are 1) high-quality insulation and thermal-bridge-free construction 2) airtight construction 3) energy efficient windows and doors 4) mechanical ventilation for air quality.

For more information on the Herman Teirlinch office building: http://inhabitat.com/belgiums-largest-passive-office-building-breaks-ground-in-brussels/

More on the Heidelberg Village at inhabitat...

Can Green Buildings Make Us Smarter?

Green is good -- outside or inside an occupied building.

A recent study published by Environmental Health Perspectives (EHP) suggests that Green Buildings create optimized conditions for health and productivity. In a series of experiments, indoor environmental quality (IEQ) factors for both “green” and “conventional” buildings were simulated in a controlled environment that included office workers, and the researchers measured variables such as carbon dioxide variation, ventilation and exposure to volatile organic compounds in the building atmosphere.

The results? On average, cognitive scores for the two groups of workers were 61% higher for those working in a building with green features than with conventional construction.  In other words, green building can potentially deliver a smarter workforce.

Get the full report at the National Institutes for Health

Architizer Site Now a Resource for Architects and Builders

Launched in 2009, Architizer has become the largest business-to-business data resource online for architects, builders and materials suppliers. The site enables design professionals to post images of their projects along with related lists of vendors who provided the building materials required to construct them. Today, the database encompasses the work of 40,000 architecture firms and more than $4 trillion worth of projects.

Architizer thus provides a clever form of “endorsement marketing” in which fellow architects and designers can shop for ideas among the posted projects, which can turn into referrals for suppliers. The site has become a powerful tool for design industry leaders to not only showcase their products, but to learn more about the tremendous range of architectural materials available from suppliers worldwide. For example, there are 47 projects from around the globe that illustrate what can be created using products from Sto. It’s an eye-opener.